Hypostatic Union of Christ: The Black and Tan 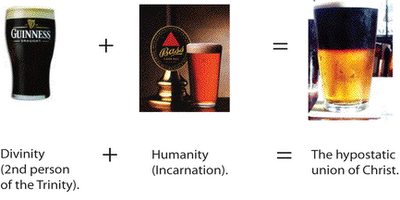 After a hard day of work and study, I found myself at the local watering hole – known by Domers as Legends – ready to enjoy a duly earned beer. I stepped up to the bar and found a stool to perch my tired body upon. I caught the bar keep’s eye, and unquestionably ordered a Guinness for my due.

Two chairs over were two gentlemen whom I determined were from the Midwest, for they said words like “soda” and “hilarious” and “you guys,” and with each instance of the vowel their voices acquired a nasal-like quality. It was clear by their slumped posture that they had been at the bar for a while and engaged in a serious discussion.

By no fault of my own, I blame physics, I could not help but over hear their conversation. Words like “Christ,” “divinity,” and “humanity” floated precariously in my direction as if each word were bait for my ears trying to lure me into their conversation. My ears devoured each syllable, and I soon found myself asking what the two slouching debaters what they were discussing.

“Christ,” they both replied in unison.

“I overhead some of your conversation. What about Christ were y’all discussing?” I inquired.

“We were just discussing the humanity and divinity of Christ,” replied the man sitting nearest me.

“What about it were you discussing?”

“Well,” replied the other man farther from me. “I just can’t see how Christ is both fully human and divine.”

“Oh, you mean the Hypostatic union of Christ. I happen to be enrolled in a Christian Doctrine class at the University of Notre Dame Du Lac, and I just leaned about the hypostatic union the other day. Maybe I can help” I stated.

Neither man replied, so I understood their silence as an invitation to continue. I impressed and inculcated what I had learned in class just the other day. When I finished, more silence followed with the addition of blank stares from both men.

Dense crowd. I don’t think they got it, I thought. Remembering Augustine’s advice to Deogratis, I decided to use a different approach. I immediately ordered a Black and Tan from the bark keep. As he set the drink in front of me, I started over.

“The hypostatic union is kind of like this black and tan,” I began.

I was barely finished saying the phrase when at once I could see their eyes light up, ears perk, and both men seemed to lean a little close to me. At the thought of mixing religion and beer and their reactions to my opening comment, I knew I was speaking their language. I continued:

“If you look closely at the Black and Tan you will see that there is no separation between the Guinness and Bass: no division. One beer seems to flow into the other. It is similar to Christ. He has no distinctions or separation between his two natures. Christ’s humanity and divinity both work in harmony with one another: just as Guinness and Bass work together in harmony to make a Black and Tan. To remove one nature from the two would be to radically change the definition of both the drink and Christ. Remove the Guinness and there is no Black and Tan, there is only Black. Remove Christ’s divinity (if such an thing is possible, which it isn’t) and there is no Christ, there is only Jesus the Man and not Jesus the Christ.

“Wow,” said the man nearest me.” “You really thought about this a lot.”

“Well, you need to know these things when you are majoring in theology,” I replied. “One last thing. Be careful not to abuse the barley juice. Don’t go beyond the point of hilarity. All things in moderation…except love, of course.”

And with that last comment, I quaffed my hypostatic union, thanked the men for allowing me to explain some theology, and exited into the humid South Bend night ready for a good night’s rest in Knott Hall.

Hypostatic Union of Christ as Related to a Black and Tan(Summary):

I. Jesus: Two Natures
- human
- divine
II. Beer: Two kinds of beer
- Bass
- Guinness
III. One Person
- Jesus of Nazareth
- No division, separation or confusion between natures
IV. One Drink
- Black and Tan
- No division, separation, or confusion between the two beers
V. Distinction is amongst the natures
VI. Distinction among the beers
VII. Each nature is preserved in full in the one Person
VIII. Each beer is preserved in full in the one Drink
IX. The two Natures act together as one, which form Jesus the Christ
X.Two beers act together as one forming the one drink called a Black and Tan.
Posted by Paul Cat at 10:21 PM

Best explanation this side of St. Athanasius. Now I'll have to try a "Black & Tan". You ought to get an "A" in theology!

Ok. Now try a synonymous explanation of the Holy Trinity using Gin, that substance (being no accident) (ouuuu, theology already!) which is closest to the nature of the Divine (Beefeater, Gordon's and Plymouth, of course). This would be the ultimate test of a true Catholic theologian.
ECL+

A Black and Tan comes into existence when Guinness and Bass are combined (I understand some attempt this with other substances, but let's keep obvious heresies out of this).

But no Person comes into existence when the Divinity and the humanity of Christ are combined. The eternal Person of the Son assumes a human nature in time.

Nor would I describe a Black and Tan as "Guinness and Bass, with no division, separation, or confusion between them." If you are poured one that lacks visual separation, send it back, and it's precisely the confusion of flavors on your tongue that makes the drink what it is.

The hypostatic union is more like drinking Guinness and Bass together, without drinking a Black and Tan.

All that said, as an image of the hypostatic union, a Black and Tan does have certain imaginative advantages over the canonical mingling of water and wine.

I wrote this based on CCC §§ 464-469. This was just an attempt at a creative summary on those six sections of the CCC. I know this is not a perfect analogy -- no analogy is perfect.

I was not interested in the incarnation and existence in this sense. It was to focus on Jesus being true God and true man found in one Person, Jesus the God-Man, Jesus the Christ etc... This was done because as I work in a church, there is a progressing trend to forsake Christ's divinity for His humanity and vice versa. Yes, Jesus is my friend, but he is also my God.

given the history, I would avoid using this explanation with any IRISH Catholics.

.... And Mary took all these beers and treasured them in her heart.

And now, I'm off to the pub for a wee bit of contemplation.

Gives whole new meaning to the phrase 'Theology on Tap'!

When one combines the British Bass, as ale, with the Irish Guinness, as stout, one makes a half and half, not a black and tan, and the Guinness is on the bottom. That mixture is not shown in the pictures.

Guinness combined with the Irish Harp, as lager, makes a beautiful black and tan like the one pictured.

And being that both Guinness and Harp are Irish you have the proper mixture of Catholic theology. When one falls into the theologically false irenicism of half (Catholic) & half (Anglican), Pandora's box opens and many horrible things result.

While it seems the author would concur that a half and half should never be used to describe the hypostatic union in any form as Christ is wholly God and wholly man, a true black (stout) and tan (lager) isn't a bad go at it.

Perhaps the bartender need some catechesis on the proper nature of a black and tan.

Drogo, you have it backwards a black and tan is 1/2 ale and 1/2 stout; a half-and-half is 1/2 stout and 1/2 lager. The Guinness is on top not the bottom because it is a lighter density than the ale. The picture above is a half-and-half. And, finally, a true Irishman would only use Smithwick's and never Bass.

Love your blog!! Have been engaged in a heavy religious debate w/ my brother, who is an aeithiest/humanist and sent him your link. Not sure if it will interest him, but maybe he'll appreciate your humor?

I've always wished that somebody could expain what a Black and Tan really is, in words that I could understand. Usually by the time they start throwing around ten-dollar words like "barley malt" and "hops", I'm totally lost. It's a foreign language. Finally, someone using regular language, like "hypostatic union."

I just used this to study for my Christology midterm since I missed the lecture on the hypostatic union. Thanks, PC!