A Review of The Thrill of the Chaste: Finding Fulfillment While Keeping Your Clothes On. 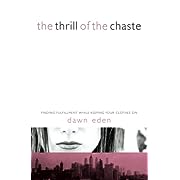 I recently had the pleasure of reading Dawn Eden's new book The Thrill of the Chaste: Finding Fulfillment While Keeping Your Clothes On. Below is my review of the book. Even though the target audience is women in their 20s-40s, I highly recommend it for both Men and Women. She has the ability to connect with the reader in a personal way not found in most writers.

The Thrill of the Chaste Official Website Go here to read reviews by Christopher West, Maggie Gallagher, and Publishers Weekly

Pre Order The Thrill of the Chaste from Amazon. Available from Amazon NOW and in Stores December 5, 2006.

In her new book, The Thrill of the Chaste, Dawn Eden writes with a naked truth and passion seen in few writers since Augustine and Pascal. Sprinkled with wit and quips, Dawn tackles a serious subject in a sometimes light-hearted Chestertonian manner by flipping the world upside down, removing the spin on life, and calling a thing what it really is. Yet, she remains bold enough to open her heart to the reader as she shares her own personal experiences in a manner that is anything but preachy. Having been part of the crowd disinterested in the pursuits of chastity and learning most often by trial and error, Dawn digs deep into the Sex and the City lifestyle and writes about it as is and the dangers that lifestyle holds for the modern woman.

Her book is rich with compassion and hope of renewal for those singles who have been misdirected by the Sex in the City message. Dawn provides not just an alternative view on life, but THE view of life as intended by delivering a message that is truly a counter-cultural remedy aimed at ending the woes found in today’s relationships. Through most of the book, she makes the case that the modern person is settling for too little pleasure by holding tightly to the Desperate Housewives mentality; clearly, we are meant for more than the whims and fads for which we too often settle.

The Thrill of the Chaste is a book that has been needed for many years to fill an absence in the chastity literature genre: the target audience is not teens but mature adults and young adults. In her book, Dawn also manages to bridge the gap between the secular and religious reasons for chastity as it calls us to rethink the meaning of sexuality. Staunch secularists will call it too religious. Conservative Christians will call it too secular, but what the text cannot be called is wrong. She speaks the truth, for she has “been there and done that”.