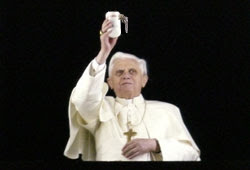 At the end of this year's midnight mass, Pope Benedict XVI blessed the congregation with the mythical Holy Hand-grenade. The Holy hand-grenade is a relic with a mysterious past. Its origins are unknown but reference to a granata santa della mano are found in the medieval journals and spiritual writings of the forgotten Italian Mystic Nessuno. The holy weapon, as recorded in Nessuno's journals, is said to have been hand delivered to Nessuno by the Archangel Michael to help combat the enemies of God in an age of modern warfare.

After the blessing Benedict wastes no time in reminding his flock of the importance of perseverance and fighting for the truth. He also stressed the danger of falling into such modern evils of materialism, sensationalism, and boringism. For those not familiar with the evil of boringism it can be summed up as a person who he himself is boring and therefore finds most things boring. People falling into the evil of boringism can often be heard saying things such as "I'm bored" or "This is boring".
Posted by Paul Cat at 2:12 AM