Napoleon Dynamite on Catholics and Catholicism 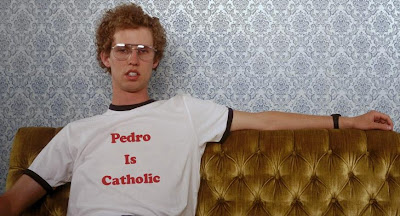 Reacently Napoleon was asked about Catholics. Here is his response.

Heck yes I like Catholics. I mean, my best friend in the whole world is Catholic. They are flipppin’ amazing. On the outside, catholics might seem a little boring, especially with all their depressing songs and psalms, but that isn’t so. Just look at their masses they have incense, fire, candles, processions, sacrifice, a big altar, wine, it's like something out of D&D. It looks like a killer time. I've even heard that it's cosmological. I told Pedro they should use some Ligers in church, but he said they couldn’t do that. It wasn’t in the normals or something. Some of the older churches have Ligers on the outside of the building –it looks like they are scared of what is inside the church and are trying to get away from something, like there is a 24th level Balrogue from the 6th plane of Dimensianois or something.

They also have like a butt load of orders in their Church. Like Friars and Priests and Brothers and stuff. They were founded by people with strange names like Benedict and Ignatius and Aloysius. They are kind of like the gangs at my school. All of them are totally different from one another.

Another reason that catholics are flippin' amazing is that the Catholic Bishops possess some pretty wicked computer skills. Have you seen their web site? Click here if you want to check it out. If you don’t believe me just ask my brother Kip. He knows technology, and Kip says the Catholic Church knows technology. They are pretty much universal, which is like another way a saying they are like infinity. The Catholic Church has a Vatican Observatory: the Jesuits do space research and astronomy there. There they make contact and talk to the superiorly advanced race know as the Nebularians. Also there is a cardinal there that has his own blog and Podcast. His name is Cardinal Arinze. Pedro listens to it almost every day. Cardinal Sean has a blog – it’s pretty sweet.

The Bishops even do a Podcast of the daily mass readings. It’s really sweet. You don’t even have to read. All you do is listen. Pedro likes to listen to it while he rides his sledgehammer too and from school. When I’m not helping him deliver cakes that he built for girls that he likes, we sometimes listen together. If you still like reading there is like an infinity of catholic blogs out there. Just Click here if you what to see what I mean.

Catholicism is pretty much really sweet: like a medieval samuri warrior with options in powers and magic or something.

That’s about all the time I have. I need to go finish cooking a delicious sea bass for Deb.

Email ThisBlogThis!Share to TwitterShare to FacebookShare to Pinterest
Labels: catholicism, word made flesh

Unbelievable! I could hear his annoying voice! My girls love that movie, but if they watch it too much, they start sounding like you!