The Rock on Ambrose and Sacraments 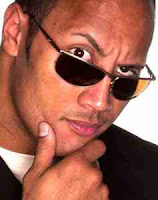 DO YOU SMEEEEEEEEEELLLL LALALA WHAT THE ROCK IS COOKIN! If you smell what the Rock is cookin’ then you better run. Because The Rock is out to get cha. Yesterday, December 7th was the feast of Saint Ambrose. He too says “If you smell what THE ROCK is cookin.” But he wasn’t talking about The Rock. The Rock knows his place. He was talking about The Cornerstone rejected by the builders. That is, Christ, who is the rock of our salvation. Listen to what I’m telling before the Rock lay the smack down on your sad behind.

My man, Ambrose, likes symbols and analogies. He even says that the sacraments are a symbol of reality. What the sacrament does to the body it also does to the soul. Because of that the Sacrament engages not only the mind but also the imagination and heart. All of which we need. The Rock ain’t talking about some imaginary things. This is real! Know your role, shut your mouth. The Rock don’t like blasphemers! So don’t blaspheme or else The Rock will come and Layeth' The Smacketh Downeth.

Hear me now you Roody Poo sissies. One example of the sacramental symbol can be found in the Chrism, otherwise know as the oil of anointing. Christians get anointed for many reasons. One reason is that oil is used to prepare people for battle. The Rock knows this because The Rock battles in the ring all the time. Before every match The Rock uses oil to prepare himself. It loosens up The Rock’s muscles and makes The Rock harder to grab hold of. Likewise the anointed Christian prepares himself or herself for battle. It makes it harder for the devil to grab onto the anointed soul. His hands just slip off. Not to mention, you get graces out the wazoo from the anointing.

Another reason is that it allows God to smell what Christ is cooking. What The Rock is saying is that Chrism, the oil, gives you an anointed sent. It is a holy smell. It is the odor of Christ and God smells it and God knows you are a Christian because He knows what His Son has been cookin’. It doesn’t matter what you think. I’m not here to hear what you think. I’m here to tell you about the truth. If you have a problem with what The Rock is saying then take it up with The Rock, and just bring it.
Posted by Paul Cat at 10:55 AM