The Battle of Catholics 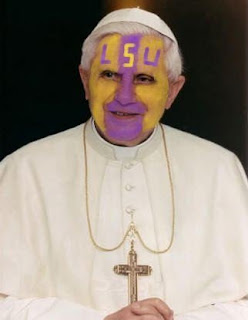 BATON ROUGE, LA: In just two days the most well known Catholic university in America (Notre Dame) and the university with the highest percentage of Catholics attending in America (Louisiana State University) will be battling it out in New Orleans, LA at this year's Sugar Bowl. It is promising to be a game to remember as two of the nations top collegiate quarterbacks will be showing their talents for NFL prospects and crazed fans. Unknown to most people who do not follow certain catholic media circles the debate has been raging in the Vatican for who the Pope, and other vatican officials, will root.

It has long been know that John Paul II favored LSU in many competitions because of the school's high percentage of catholics. After winning the NCAA National Championship in 2003 against the Oklahoma Sooners in the Sugar Bowl a few years back, the late Pope John Paul II gave the then head coach Nick Saban a papal blessing. It made front page news all over the local Baton Rouge Catholic periodicals.

Since Ratzinger's election to the office of the Pontiff, it has been questioned as to where his loyalties lay. Without a moment too soon and at a recent press conference unknown to most of the press and not as recent or as late as expected, the Pope revealed his choice for this year's Sugar Bowl.

The Pope arrived at the press conference in his typical papal white, but with a slight twist. His face was painted purple and gold in alternating vertical stripes with the letters "LSU" painted in purple and gold on his forehead. It appears that Benedict XVI is following in his predecessor's footsteps in more than one way.

The Pontiff dubbed the game "The Battle of the Catholics", but he stressed that it is important for Catholics to stick together and be "one just as our Lord is one." Although two great Catholics will be in competition with each other, they both still remain under the same roof as the other. What takes place on the field in healthy competition, we should not allow it to seperate or divide the Catholics of the world. B-16 added, "that it is of grave importance that we use this opportunity to watch two great teams and see and analyze the hard work, devotions, dedication, and virtues that come from healthy competition, for what happens on the field is substantially applicable to life off the field." He then continued by saying it is through athletics and healthy competition that people of the world can start combating relativism and other evil "-isms" of the modern world.

Even-though the Pontiff favors LSU in the Sugar Bowl, he ended the press conference with a list of other vatican officials, cardinals, priests, and religious orders who will be rooting for Notre Dame.
Posted by Paul Cat at 12:05 PM