My High School...Well, What is left of it. 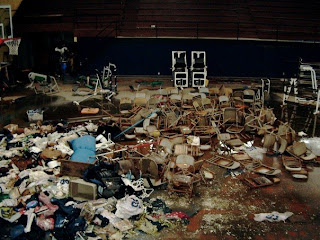 This is what is left of my High School

Almost a year and a half after Hurricane Katrina hit New Orleans and the rest of the Gulf Coast, my high school (Holy Cross School) still remains in an almost unaltered state since the flooding cleared. A couple of friends and I braved toxic mold, sludge, and asbestos to bring you these pictures. These images were taken on December 31, 2006. Above is a link to just some of the pictures I took.

The school has been in New Orleans since 1842, and has been educating the youth of the city through the ministry of the Holy Cross brothers and priests, which is the same religious order that founded and runs the University of Notre Dame. Shortly after the founding of Notre Dame, the Holy Cross brothers arrived in New Orleans and began the operating an orphanage. The school remained an orphanage until 1879 when it graduated its first high school class.

Notre Dame and Holy Cross School have had a long standing relationship. In fact, during the great depression, Holy Cross school sold the majority of its land (which extended from the Mississippi river to Lake Pontchatrain) to help ensure that Notre Dame would not have to close due to finical difficulties.

There are plans to rebuild my high school in a different location, which explains some of the reason for the school remaining in the state that it is found. However much of the process of relocating is caught up in disputes with FEMA, insurance companies, local residents, and the list can continue.

Still, much of the city is residential areas of the city are still in bad/horrible shape. Only about half of the residents are back in my neighbor hood and my neighborhood was not flooded.
Posted by Paul Cat at 4:19 PM