A Good Glass of Beer: An Imitative Response to George Orwell's "A Nice Cup of Tea." 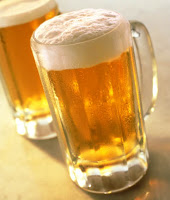 If you look up “beer” in the dictionary you might find a vague description of what beer is and how it is made. The definition might consist of, “an alcoholic beverage made from barley and hops using a slow fermentation process,” but this definition lands far from the intricacies of beer that all real beer drinkers know and love -- as it gives no guide to what a good beer is.

This is curious because beer has existed since before the pharaohs of Egypt. Festivals throughout the world have been established celebrating this drink of choice. But no guides have been successfully written declaring what a good beer is, which is quite shocking seeing as the mention of the subject can send a civilized individual into a violent fury if you disagree with his or her good beer of choice.

When I look through my own database of good beer, I find nine points of importance. On several of them there would be pretty general agreement, but there are others that standout as highly controversial. Here is my guide to good beer, every point of which I regard as golden:

First of all, America brews few good beers. You can drink American beers, but most were not designed for tasting — only getting drunk. So if your goal is to get drunk and reside half the night in the bathroom, or if looking for an economical beverage then please feel free to drink American. However, every good beer drinker should drink beer from Germany or Ireland (and the occasional Belgium Ale) — specifically, the Irish Stout and the German Ale. Anyone who has used the comforting phrase “a good beer” invariably means Irish or German beers.

Secondly, beer is properly made in small quantities — that is, not mass-produced from Budweiser. Because beers from these places are often water-downed and left tasting the same as every other overly produced beer. If the beer is made in large quantities the carbonization should be allowed to occur naturally through the slow fermentation (a rarity now a days), for any beer that has carbonization injected will surely be left tasteless.

Thirdly, beer should be served in a 19 oz. imperial pint glass. That way one is sure he or she will be receiving the full measurement. The glass can be frosted beforehand, although it is not recommended. This is done best by sticking it in the freezer until a lovely white frost has formed on the glass. Other methods of chilling such as: shoving it in the fridge, packing it with ice, or swirling cold water should not be considered, for they will forever be inferior to the freezer. The only other acceptable drinking visages are a frosted mug or bier stein – unless of course considering the Belgium Ale, which is a completely different beast. Any other visage is either far too sissy or will make your drink warm too quickly. Never drink beer from a paper or plastic cup. This is an insult to the drink, brew masters, and beer lovers.

Fourth, the beer should be strong and full of flavor. In a time of rationing — either financial or other – this is not an idea that can be realized every day of the week, but I maintain that one strong satisfying pint is better than twenty weak ones. All true beer drinkers enjoy their drink strong, which through time becomes naturally sweeter to the old-age pensioner’s pallet.

Fifthly, one should take the self to the beer and not the other way about. The brew should actually be drunk in a bar, pub, or tavern, for the atmosphere adds much to the flavor. Never should beer be drunk from a can or bottle (unless hindered by a lack of pubs or blue laws). Every true brew lover knows that the taste is changed for the worse when bottled or canned. Stick to draught at the pubs and taverns for fresh taste. Avoid clubs and disco techs for good beer: you will find none.

Sixthly, your ale or stout should be served with a good ¾ inch head. If drinking a good stout make sure it is double poured, and allowed to settle before enjoying.

Seventhly, beer is not to be sipped, nursed, or tossed back in a single go. It should be gulped and finished in 3-5 attempts — any more and the beer starts to become warm, any less and you cannot fully taste the flavor and experience the bouquet of the drink.

Eighthly, nothing should ever be added to your beer. If you need to add something to your drink, as is the custom with Mexican brews, than the beer is not naturally flavorful and therefore not worthy to be considered a real drink by true beer lovers and is useful only for making frequent visits to the bathroom. The only thing that should be added to beer is more beer either of the same kind or of another when making a mix.

Lastly, beer is not to be artificially sweet. It is by design to be bitter and not taste like lemon, apple, or raspberry. If it is sweetened, you no longer taste the barely and hops, you are merely tasting the sugar; they make similar sweet carbonated drinks called soft-drinks, sodas, or pop if you are looking for sugar. If you want a sweet alcoholic beverage try one of the 1000s of girly drinks. But still, how can you call yourself a true beer lover if the flavor of your beer has been destroyed by making it sweet? It would be equally reasonable to make it peppery or salty.

Some people would answer that they don’t like beer in itself, that they only drink it in order to get drunk, and they need the sugary taste to take the bitterness away. How insulting is this to the beer-lover. Never would one insult a champagne maker by telling him the only reason to drink champagne is to get drunk. To those misguided people I would say: try drinking a real beer --you probably have never had a real beer before only the water downed cheap American imitation. Try one from Germany or Ireland and it is very likely that you will never want to ruin your beer experience by ordering a low quality or sweet brew again.

These are not the only points to arise in connection with beer drinking, but they are sufficient to show how subtilized the whole business has become. There is also the mysterious social etiquette surrounding the pour (why is it considered vulgar to drink straight out of the tap, for instance?) and much might be written about the subsidiary uses of last few drops and bubbles left in the bottom of your glass, such as telling fortunes, predicting the arrival of visitors, feeding rabbits, healing burns and washing your hair.

Email ThisBlogThis!Share to TwitterShare to FacebookShare to Pinterest
Labels: beer

you should use Harp, not Bass. There is no union of Erin and GB

I think we might be good friends... you have truly captured the thing of immeasureable beauty that is a perfect pint... sweet blog!

A couple of grammatical corrections: In the eleventh paragraph ("Eighthly, ...") the word "than" should be replaced by "then". The sentence is of the "If...then..." variety. "Than" is a comparative adverb; "then" is used to indicate a sequence of events or that a particular fact follows on the basic of a previously mentioned fact. Also, I believe the term is "watered-down" not "water-downed".

Other than that, I quite enjoyed your post. I raise a glass to you, sir.