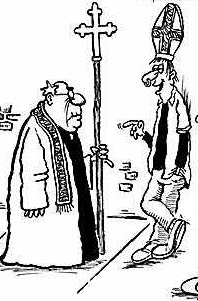 The following is an excerpt from a preconfirmation interview between Local Bishop and Confused Teen.

Bishop: As I do with all my confirmation teens in the diocese, I take the option to interview each and see what it is they have learned and why it is they want to get confirmed. Since it is Lent, I think it fitting that the first question be Lent related. So, what was Christ doing for 40 days in the desert?

I would also imagine that since it is a divine dessert it would be a large cake. It would seem strange that Jesus to build a cake, but perhaps he was baking a large cake, so that he could jump out and surprise people at the resurrection.

Bishop : I think you misunderstood…

Confused Teen: Hold on Bishop. I’m on a role.

So that brings us back to your question: what was he doing in the dessert for 40 days? Well he wasn’t in the cake the entire 40 days. The bible says he was both out and in the dessert. Clearly it is a reference to the time Christ spent building his cake. But after building the cake he hopped in and sealed himself in the dessert. He need not worry about food, because he could have timed it right that he could eat himself out of the cake. This is proven from what he told the devil that “Man cannot live by bread alone.” Man also needs dessert.

Being in the dessert is not just about having your cake, but eating it too.

Bishop: That is perhaps the most unexpected answer I have ever received. Where do I even begin? First Christ was in the desert and not in dessert – one ‘s’ not two. I do believe that baked goods, other than bread, have little to do with Christ, regardless of heavenly names. However, as you probably learned in your religious education classes is that Christ was in the desert for 40 days because he was entering into a time of preparation before his ministry. Jesus went there to be tested, because part of preparing for a mission involves testing.

Jesus was also in the desert for 40 days because it echoes other events in salvation history where people were prepared for some length of time involving the number 40. First there was Moses who spent 40 days on Mount Sinai receiving God’s law. Then the Israelites wandered in the wilderness for 40 years before crossing over into the Promised Land. Lastly God gave the Ninivites 40 days to repent and turn back to God – those Ninivites, a bunch of fish slappers they were.

I could go on this topic for much longer, but due to time constraints we will move on to the next question.

How does book 7 of Aristotle’s Metaphysics relate back to the Organon and his view of humanity’s teleology as stated in the Ethics? ……..
Posted by Paul Cat at 11:00 PM