Anti- Abortion activists Use Shock Tatics on Campus. This is a nice peice. A Student for Life member gives great responses to the reporter connnecting the Virginia Tech killings to Abortion -- both are murder. Yet, when will the media learn that "Pro-Life" doesn't not translate to "anti-abortion". I also love how the Media put the picture of the man with the crucifix next to the picture of the aborted baby in the paper and not a picture of the Students for Life praying the Rosary.

Protest Misses the Point. A ridiculas OpEd about not being pro-death. In other words, she wants to solve the problem by ignoring the issue and passing the Buck. This student is probably the same person who would save a drowning dog over a drowning person.


More here from Michael R.. Denton who goes to LSU and who was at the Rosary and blogs over at For the Greater Glory

*Picture is from the LSU Reveille Site.
Posted by Paul Cat at 10:13 AM 2 comments:

Rome: Anounced in a less then attended press conference, the Pontifical Office of the Liturgical Police revealed the Special Forces unit called Triage. This is the next step the Vatican is taking in order to end Liturgical abuses. Discenting Priests and Liturgist beware. Any of the specially trained Triage team may be at your church.

Powers: Has the entire two volume "Rites" and "Blessing" books commited to memory. One bad-ass holy water sprinkler guarenteed to soak any congregation with the holy water of our Baptizism.

Special Ability: Able to bless a house in under 2.5 seconds. 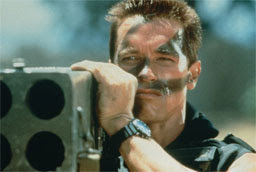 Powers: Knows what to say and when to say it in the mass, and he isn't afraid to confront and make right a dissenting priest or liturgist. Comes equiped with a incense launching censor. His goal is to restore all the missing "smells and bells" at the parish near you.

Special Ability: Able to blend the perfect mix of incense for any liturgical occasion without the aid of measuring devices. 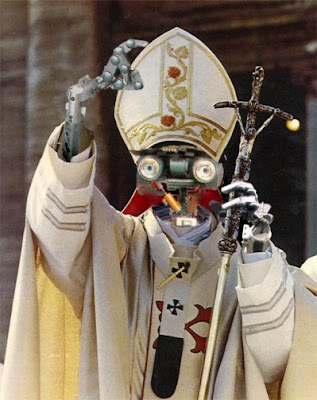 Powers: Can answer any question asked of him about the liturgy.

Special Power: Dressed as the pope to serve as a constant reminder that the Pope can tune into the frequency driving LEM and see what LEM is seeing. Also has laser vision in order to burn any heritic on the spot.


Don't forget the Check out the honorary member over at the Aggie Catholic: the Liturginator.

This Post was inspired by Chris over at Aggie Catholic
Posted by Paul Cat at 6:48 PM 3 comments:

Thanks for the Prayers

Still out of town. But I am alive and kicking.
Posted by Paul Cat at 6:47 PM 1 comment:

A recent death in my family requires me to return to New Orleans for an undetermined amount of time. Blogging will be VERY limited as my family needs my attention. Your prayers are greately appreciated for my family.
Posted by Paul Cat at 12:25 AM 8 comments:

After the recent announcement of the Vatican TV station, I was thinking the Vatican should venture out into movies. Here are a few of the suggested titles.

The story of a Man who has an extraordinary liturgical encounter while accidently sitting on the first row, which becomes life changing for not only himself but those around him too.

Follow the misadventures of two skateboarding teens as they are sent on a journey by the local parish priest which proves to be the key and calling from God as they encounter and discover the Liturgy. 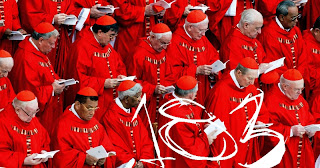 Watch 183 angry men battle it out as they elect a new pontiff: conspiracy and treachery galore.

Three unspecting priests get assigned to the rogue parish of their diocese better known for its abuses than its uses. Their only means of survival: sticking together. Is it God's Will or just mere chance as they set about trying to thwart the evil liturgist Mrs. Mann Hans?
Posted by Paul Cat at 10:32 PM No comments:

So Who Is This Brownback Guy?

No no no... I didn't say Brokeback. I said BROWNBACK. You know, the Senator from Kansas. If you're like me and don't know who this guy is, the Washington Post did an excellent article.

Brownback in the Washington Post
Posted by Paul Cat at 8:10 PM No comments:

Well, I don't think this is conclusive evidence against evolution, but it is certainly interesting. On the other hand, life doesn't exist in a vaccum.....sealed jar of peanut butter.

Will Return After the Resurrection

I hope everyone spends time this week preparing for the Resurrection. Part of my preparation is to give up blogging for a week, so I can spend a little more time doing prayerful things -- like reading the bible or praying the rosary or feeding the poor or walking on burning hot coals or sleeping on a bed of nails.

This is one of the coolest things I have seen in a long time.

Email ThisBlogThis!Share to TwitterShare to FacebookShare to Pinterest
Labels: music

From Jeff at the Curt Jester Scroll down a little. I can't seem to get the perma links to work.
Posted by Paul Cat at 11:52 PM No comments: 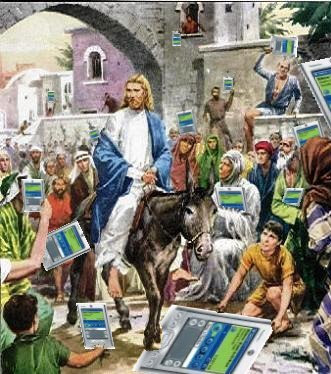 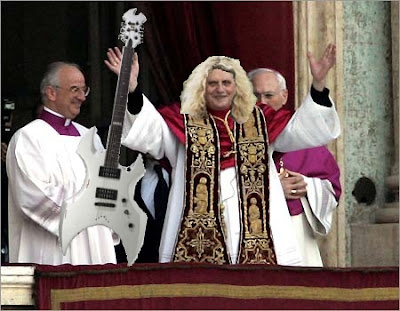 Vatican City, Italy: Just mere moments ago Pope Benedict XVI announced that he will be leaving behind his papal whites to fulfill a lifelong dream of starting an 80's hair metal band -- he'll soon be trading in his papal staff for an ax guitar and his mitre for a hair-metal wig.

The word of the Pope's decision came as a shock especially after a recent labeling of Bob Dylan a "false prophet."

His decision is already making waves around the world. We have received reports of millions of catholics flocking into churches in order to do penance and prayer for the Pope so that he won't go.

It is being reported that thousands of teens from around the world have gathered in St. Peter's crying and chanting "Say it ain't so! Please don't go!"

Desperate attempts are being made by those across the western countries. Men and women a like have flocked to bars and have been ordering German beers all day. One patron commented, "Maybe if we drink enough beer here in America and show the Pope that we love beer too. Maybe then he will stay."

As those people who remain faithful to the pope and the papacy seem devastated, the other end of the spectrum seems to be rejoicing. For in addition to the reports of the mourners of the late pope, we have been receiving unconfirmed rumors of Barney Blessing popping up all over the world, cookie masses, and broadway style eucharistic prayers.

Speculations are swirling as all Cardinals have been called back to Rome not to elect a new pope but to talk Benedict XVI out of leaving the papacy.

It is being suggested that the Pope will be calling his band, if in the end he does leave the papacy, "The Papal Preachers" where he will go by the front line name "Papa Ratzzi."
Posted by Paul Cat at 9:25 AM 2 comments:

Miracle of Life: 9 months in 20 seconds.