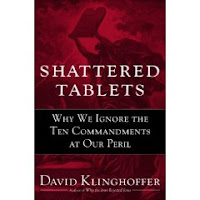 There is little doubt that the author believes that America’s moral, political, and social lives are in decline. Why is America in decline? Because she ignores the Ten Commandments, says Klinghoffer. He uses Seattle as his evidence for America’s decline -- as he holds the city to be a microcosm for America. That is, if American doesn’t get its act together and shape up, it will turn into a large scale Seattle from coast to coast. However, he argues, it will not be the nice six-square blocks of Seattle that tourists experience upon visiting the city. It will turn into the Seattle that is his home: a modern day Sodom. Klinghoffer, at the start of each chapter, ties in a story from his Seattle experience into each of the Ten Commandments -- some stories more hair raising than others – where he depicts a Seattle that is morally void. It is a Seattle where mothers fist fight out front Starbucks and knock over one another’s baby carriages fit with babies still in the carriage. A Seattle where people are more concerned about paper bags in grocery store than about one’s neighbor. A Seattle where people have pets instead of children. A Seattle where anything traditional is considered ignorant and scoffed at, regardless if it is true or right. A Seattle where morality is in such a decrepit state that just about anything is considered permissible: murder, theft, homosexuality, and bestiality.

Shattered Tablets is not just a running social commentary on the state of America. Being of the Jewish faith, Klinghoffer, tries to open up the ten commandments to his readers and get to their original meaning. For instance, “You shall not steal” means more than just the theft of another’s belongings. It relates to a hierarchy of stealing -- the gravest being the stealing of a person into slavery; that is, to fool, trick, or force someone into being a slave. Second is the theft of a person’s heart of mind. This can be boiled down to our modern understanding of deception (sometimes referred to as keeping someone “in the dark”). The last kind of stealing deals with the taking of another’s personal possessions without proper reason. For a good example of this read the Jacob cycle in Genesis (Chapters 25-35) with close attention to Jacob and Laban’s interactions. For Laban forces Jacob into an additional seven years of slavery, steals his mind by passing off Leah as Rachel, and steals Jacob’s possessions by constantly changing his wages.

Sadly, I thing Klinghoffer might be preaching to the choir in some ways. I find it difficult to believe that the people who would most benefit from reading this book will be the one’s reading it. However, there is still much merit in the book, even if already familiar with the Ten Commandments. For he does shed much light on an ancient text that clarifies and reinforces Jewish and Christian beliefs in a way that is lively, interesting, and very readable.
Posted by Paul Cat at 3:07 PM