Sex, Beer, and a Catholic Church 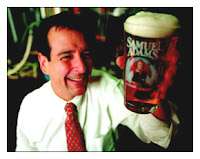 I hate telling people what to do and what not to do, but you might want to reconsider drinking Samuel Adams beer, and for that mater anything that comes from the Boston Beer Company. I kept hearing rumors that Samuel Adams sponsored, on a number of occasions, a contest called "Sex for Sam" that encouraged contestants to engage in sex in some strange places: Times Square, NBC Today, on a Bus, in a museum (click here for the list); each place the contestants had sex, they would receive points for its corresponding location.

Now what does this matter to a Christian? Well the contest Hosts, Opie and Anthony of the Opie and Anthony radio show, encourage a couple to have sex in Saint Patrick's Cathedral in New York. The couple were arrested, Opie and Anthony were fired, and the radio station fined over $300,000. But despite firing, it did not discourage Opie and Anthony to drop the "Sex for Sam" contest when they entered the arena of XM/satellite radio, neither did it stop Jim Koch (owner of Sam Adams and Boston Beer Company) from sponsoring the event.

Besides sponsoring the event, Jim Koch was a guest on the Opie and Anthony show, and while a guest he became the "Celebrity" of which people (5 couples) attempted to have sex in front of him in order to gain 30 points towards the contest. Jim did nothing to stop it. In fact, Jim felt embarrassed . . . for the three couples who did not succeed in capturing the celebrity voyeurism points (Jim was the celeb). Jim then went on to say that all the competitors were, "awesome, all of 'em, better teams. The quality gets better every year."

Now, I don't know about you, but I don't think I want to buy beer from a guy who promotes and encourages exhibitionism, displays a low moral character, and appears to lack the backbone to get up and leave. In other words, I don't think I'll be buying beer from Jim Koch any more.

If you want more information, the people over at The Smoking Gun reported more on the story. They also have links to the radio show and the Fox5 news cast that reported the story of the couple having sex.

Getting over it would be easy if, Jim Koch would show a little remorse about the event. Plus he, has done nothing to prove that he will not participate or sponsor an event like this. The closest he got to it was saying it was a lapse in judgment and a serious mistake.

I'd be willing to bet that if there is another "Sex for Sam" contest that Jim and the Boston Beer Co. will sponsor it again. But even in the public apology he gave after the incident in 2002 there was no indication that he would not sponsor such events as "Sex for Sam".

In the mean time, there are many better beers out there than Sam Adams, so I'll just stick with that.

And this means? Let's see? Let's stop paying school taxes because they teach evolution? Let's stop using hospitals because they perform AAP contraindicated neonatal male circumcisions and abortions? Let's avoid women altogther because they have vaginas (my wife has to go)? Let's leave America because they have gay rights? Let's quarantine the East and West coasts because they're liberals and have the top American colleges there that teach real social issues? Oh yeah, beer is a major social issue, I forgot. Why bring up Christian issues like sexual abuse problems in the priesthood caused by celibacy. But BEER, THAT's an important Christian crisis. Thanks.

Anonymous, I think you missed the big picture of what Paul was getting at.. the point is that we could be more vocal and active in condeming immorality in our culture. Maybe if we were, the things you mentioned wouldn't be happening. This beer thing is just one example.

FYI, the sexual abuse problems in the priesthood is not caused by celibacy, but rather is caused by the Church ordaining perverts.

Anonymous-
It is a simple matter of economics. Alive and Young was merely stating that since Boston Beer Company supported these sexcapades, people who object to such immorality can show their displeasure by not buying their product.
Consider- the attacks not so long ago leveled at Google for compromising with China? Same idea. If you disagree with a company, don't support them.
Simple economics.

BTW, I live Sam Adam's beer, but I ought to reconsider purchasing their product if they are advocating such heinous and unscrupulous acts.