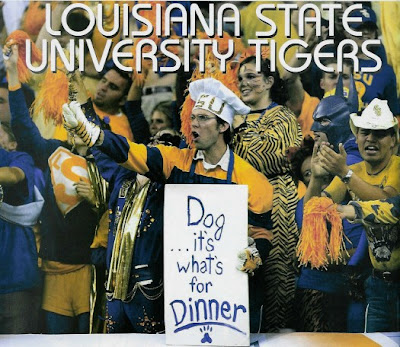 I was wondering the other day, "What happened to all the crazy LSU fans?" You know the ones that used to dress up for all the games. I know a large number graduated and moved on, but who has stepped up to fill the role? I haven't seen much fan action on TV the past season. I see a few people who paint their faces and spell out "Geaux Tigers" on their chest or wear funny hair, but where are the costumes from the past? I did see Batman, Superman, and Snowwhite but they were sporadic at best and not grouped together as was the case when I was an undergrad there just a few years back. I know costumes and dress aren't supposed to mean anything spirit wise, but it does. Man, the fans and players LOVE it too. Dressing up is a sure fire way to show your support for your team in more ways then just cheering; that is, dressing up is a physical manifestation, the actualization, of one's team spirit. It is the symbol (the throwing together) of team spirit and wardrobe. It allows both fans and opponents to experience and see the hidden, inner spirit that resides in the heart of the fan. Chants, cheers, and shouts are certainly of a similar quality, but dress allows a person to say "I'm a fan" without uttering a word. Dress and extreme body paint show the varying degrees of fandom. Hmmm I smell the beginning of a philosophical discourse on the relation of team spirit and dress (just kidding). I propose that if the crazy LSU fans that I know are at the school would only not hold back and let their spirit spill out of the stands and onto the field that the Football team would stop giving its older fans heart attacks with such close games.

Note: Picture is from the "Sugar Bowl Showdown" magazine for the 2003 National Championship Sugar Bowl game. The Picture was taken at the SEC championship game in Atlanta against Georgia. If you are interested I am the one with the sign. My roommates were Elvis, Batman, and the Guy in the cowboy hat. So you can only imagine what Friday and Saturday were like in my apartment -- if we weren't camped out in front of the stadium waiting from the night before so as to get the good seats we were driving to the away games. Elvis is now Married to the girl in the Superman/girl outfit to the left of the picture. Not appearing in picture (becuase the lens wasn't wide enough): LSU Spiderman, Purple and Gold Cow, LSU Speedracer, LSU Uncle Sam, and the numerous other fans wearing more ridiculous costumes and outfits. We were working on an LSU Riddler, but I don't think it ever panned out.
Posted by Paul Cat at 5:46 PM

Email ThisBlogThis!Share to TwitterShare to FacebookShare to Pinterest
Labels: LSU

I hope this finds you doing well. This is the other Paul's aka Spiderman's dad. Can you please send me any picture that you might have with him in it. His little brother would like to see him. Also, please check out my blog at deepsouthdeacon.blogspot.com. I have a poll there to which I would like you to respond.