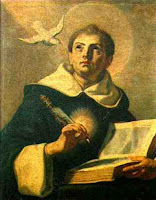 Objection 1: It would seem that chivalry is dead today. For there is no need for chivalry in an age with no knights and ladies.

Objection 3: Further, the object of chivalry seems to be the oppression of women. Christ came to liberate all from all kind of oppression and therefore chivalry is not in actuality a good, but a tool for the enslavement of women.

On the Contrary, it is written “Love your neighbor as yourself” (Matt 22:39).

Reply to Objection 1: Though there are not knights in our current time, chivalry has little to do with military rank. The end of chivalry is right relationships between people.

Reply to Objection 2: There are many things that women can do and do equally as well as a man. Yet, according to the philosopher we know that each sex has different predications to its form. Because of these different predications to the form of the person it is known that man and woman are not the same. They may be equal in quality or quantity or in their end, but that does not mean they are the same. Since man and woman are equal and not the same, it is right to say that they will interact differently with each other and to act wrongly outside of charity is to operate outside of justice. Further, because each person is different, each relationship will be different and will require varying degrees of chivalry in order for justice to be had.

Reply to Objection 3: The object of chivalry as well as its subject is another person. Chivalry is reciprocal and requires participation from two parties in order for it to reach its end. Though Christ came to liberate us all from oppression, he did not come to liberate us from virtue, for chivalry requires virtue, specifically humility from both parties, in order to be made actual. Chivalry’s end, as stated, is right relationship. The oppression and enslavement of women is not in line with the order of justice and these actions cannot be considered chivalry.
Posted by Paul Cat at 10:49 PM

Email ThisBlogThis!Share to TwitterShare to FacebookShare to Pinterest
Labels: Theology

There is always a need for chivalry, and it's not dead. As a woman I find it in the strangest places- homeless shelters, food banks, and the grocery store.

Chivalry has very little to do with gender- I think that women can be chivalrous as well. Courtesy, piety (no matter which, or indeed if any religion you espouse), looking out for the underdog, being polite, standing up for what you believe in, and treating everyone with respect.

Chivalrous people make the world a better place- it's a sad comment on society when it's looked on as a negative thing.

Chivalry is, indeed, a virtue. I don't really think chivalry is dead, but if it is on life support, it's because men do a sad job of living the virtues that common decency point toward.

BTW, found you via the Manival. Thanks for submitting!