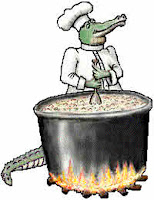 Dear Cajun Chef,
Can you explain to us the Holy Trinity?

Oh mi yeah cher. But you know dat I am no theologian, yeah? I only know what I know. And what dis poor cook knows is food ami. So if de Holy Trinity is anything like food I make, as pastor Mike over down at San Joan’s he says dat God, He in all His creation, den de Trinity is much like Onion, Green Pepper, and Celery.

Now you know you heard of dese tree vegetables dat make up my food’s trinity. But really, in my cooking, dese tree vegetables are really one seasoning. So dis one seasoning is make up of tree distinct parts. We call it de holy trinity of dee Cajun food. You don’t make much food wit-out de holy trinity down in Acadiana. True wit-out de Holy Trinity what dey be cher? Nothing. So we need both God de Tree and de food’s trinity to survive. But you know dat de holy Lord almighty be one and still tree. How dis is I don't know. I am just de cook. It be de mystery mi cher.

Like I say and like you know, God is tree and so be my seasoning. Don’t be fooled mi ami. Each vegatable is distinct from de other vegetables, but dat seasoning, though we call it seasoning, it really be just vegetables. So de Onion be fully de vegetable. De green pepper be fully de vegetable. De celery be fully de vegetable. But like any poor coonass know each of dem vegetables is not the same as de other. De onion be not de pepper. De pepper be no de onion. De celery be not de onion or de pepper. Truth is what it is and horses may swim in de ocean, but each of de vegetables seem to serve a different function but also a role like de other two. I don’t know maybe de Onion is like de Father, de pepper is like de son, and the celery is like de holy Ghost. Each can be used by it self but is never alone or far from de other two. But what-eva you do it c'est bon in de roux or stew and even betta in my stomach.

Maybe some people don’t listen to me and don’t think dere be a trinity. To see de trinity all you have to do is look in de gumbo pot. Because dere be de gumbo we know dat dere be de trinity of de onion, pepper, and celery. Poo Yie, you can’t have gumbo wit-out de trinity! You can’t have life wit-out de Holy Trinity! So don’t let people tell you otherwise ami.
Posted by Paul Cat at 1:21 PM

Email ThisBlogThis!Share to TwitterShare to FacebookShare to Pinterest
Labels: Theology

I recently came accross your blog and have been reading along. I thought I would leave my first comment. I don't know what to say except that I have enjoyed reading. Nice blog. I will keep visiting this blog very often.