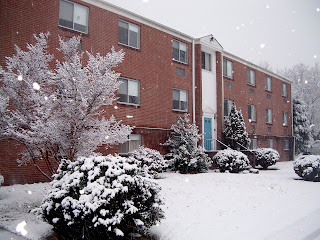 [Set to the tune of Coolio's Gangster's Paradise. Also my roommates and I live in an old convent -- thus the name of the song. And yes, that is a picture of the convent in which I live.]

As I walk through the valley in Delaware.
I take a look at my life, and realize we’re pretty square.
'Cuz I've been Catechizing so long that.
Even my Bishop thinks that my mind is gone.
But I ain't never punched a deacon even if he deserved it.
Me be treated like a nun, you know that's unheard of.
You'd better watch how you bowing and where you praying.
Lex orandi, yo, Lex credendi, fool
I really hate to say but I gotta hope.
In the church I see myself in the incense smoke, FOOL.
We’re the pious guys that little servers wanna be.
Like on my knees in the night sayin prayers in the street light.

Look at the situation Baumback’s got me facein'.
I can't live a normal life, I was raised in the Church.
So I gotta be down wit the Cler-G.
Too much Law and Order watching got me chasing dreams.
I'm a educated fool wit Jesus on my mind.
Got my beads in my hand and the grace in my eye.
I'm a broke ECHO apprentice eattin ramen
And my mentor is down we share things in common, FOOL.
A Hot a mess be but a heartbeat away.
I'm livin life do or die, what can I say.
I'm 23 now but will I live to see 24.
The way things is going I don't know.

Tell me why are we so blind to see.
That God’s grace he gives is for you and me.


No Power and No money, No money and No power.
Minute after minute, hour after hour.
All the time I’m teaching but half of them are sleepin.
I’m here in the office, but I’d rather be fishin.
They say I got to teach, but nobody's here to learn it.
If they can't understand, how can I pass them.
Name a sacrament?.
I guess they can’t.
I guess I quit.
That's why I’m movin in with ******.

Tell me why are we so blind to see.
That God’s grace he gives is for you and me.

Tell me why are we so blind to see.
That God’s grace is in our community.

[Big Thanks to my roommates of helping write and preform it on a retreat as we attempted to let the other ECHO house holds know a little about our life living in a convent and working for the church.]
Posted by Paul Cat at 11:21 PM

That is pretty clever!