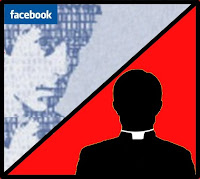 Last week, Father Chris Decker of the Diocese of Baton Rouge in Louisiana, and one of the personalities on the podcast the catholic underground (CU), logged onto his Facebook account only to discover that his religious title “Fr.” had been removed. Quite confused by the matter, and thinking it to be a glich, Fr. Chris called his friend, and other CU personality, Josh Leblanc to inquire about the situation. They discovered that the title ‘Father’ had been removed from nearly all the priests on the Facebook network. His suspicions were confirmed; it was no glich.

Father Chris and the rest of CU crew, all of whom use various media as tools for evangelization, thought it imperative that the title of “Fr.” remain on priests’ accounts as it demonstrated, in a subtle way, the church and her people encountering and engaging the modern world as well as it actualized the call for the new evangelization. So the CU crew, along with the help of many associates, set out to inquire why the titles of “Fr.”, and in fact “Sr.” also, disappeared from people’s Facebook accounts without any notice or explanation.

Father Jason Vidrene, associate pastor at the Catholic church on the University of Louisiana-Lafayette and also occasional guest on the CU podcast who also believes that “Fr.” is not just a mere title but a part of who he is as an ordained Roman Catholic priest, contacted the Facebook staff via email only to receive a reply from a Facebook representative named Patrick who wrote in his reply to Father Jason: “We no longer allow titles on Facebook for sake of confirming a true identity of those who have profiles.” It was an answer that was unsatisfactory.

After several exchanges over email between Father Jason and Patrick of Facebook, the rational behind their decision was explained in that Facebook does not wish to deceive or mislead people into thinking that its members are someone else than they claim to be. Yet, even Facebook is uncertain in regards to its own policy as to why titles were removed from names. Sarah Asbery of Atlanta, GA contacted Facebook about the same issue and received a message from a representative name Christina who gave the following reason for removing titles: “We are not trying to censor users, we just encourage only first and last names to make searching for people much easier.” Other explanations for the removal of “Fr.” from the Facebook staff includes: “Impersonating anyone or anything is prohibited” and “Any title on a user's account name is a violation of our Terms of Use.”

Whatever the reason for the removal of titles one thing is certain, Facebook has no procedures in place for confirming any information a user provides to Facebook beyond the initial email address required at account set up and there was nothing in their Terms of Use addressing the use of titles. However, Facebook’s Terms of Use does state that the user has sole responsibility for the use of his or her personal name. Furthermore, there is no way to know, via the social network, if a person is who they say they are beyond basic trust in the human spirit.

To prove the point that Facebook has no means in confirming its users, does not keeps track of its members’ identity claims, and is not serious about quality control, Josh Leblanc of the CU, created a false account for the late fifth century pontiff Pope Zosimus II. Josh even outfitted Pope Zosimus’ profile with nonexistent universities and other unverifiable information about the late pontiff. According to the late Pontiff’s Facebook profile his activities include “Running the Catholic Church, Appointing Bishops, Writing Encyclicals.” Pope Zosimus job discription goes as follows: “I ran the Catholic Church for a few years.” His favorite TV shows: “TV????” Likewise with movies. Other late individuals who have accounts on Facebook include Flannery O’Connor, Mr. Rogers, and Walker Percy; Yogi Bear even has his own account.

Yet, Father Jason, Josh Leblanc, and the 1,200 plus members of the face book group “Facebook - stop removing Fr. from priests' names!” are wondering whether or not this is a case of anti-Catholicism or at least a Catholic bias. Their evidence: Facebook has only removed the titles that are associated with Catholicism, Father and Sister, and has allowed others to keep the titles of doctor, reverend, yogi, sir, senator, and congressman. Further, Father Jason cites on the Episode 69 of CU that even though he signed his correspondences with Patrick as “Father Jason”, Patrick refused to address Father Jason as ‘Father’ and instead just called him “Jason.”

To date, Facebook has not given an adequate answer as to why only certain religious, specifically Catholic, titles have been removed, while other professional, political, and titles of other faith traditions remain.
Posted by Paul Cat at 10:56 PM

Email ThisBlogThis!Share to TwitterShare to FacebookShare to Pinterest
Labels: news