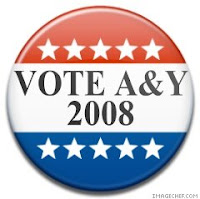 You know that other guy. You know. The guy who everyone thinks is funny. I bet you didn’t know this but he imports his humor from China. His laughs and wit, aren’t his own, and he doesn’t even write his own jokes.

I bet you also didn’t know that he voted twice against the American Humor Act. Don’t believe us? It’s in his voting record. Not only that but he drinks that water-downed skim milk stuff (how disgusting). To make matters worse, he even voted for himself in last year’s elections. Is this the kind of person you want representing the Catholic blogosphere?

There is no skim milk in Alive and Young’s fridge: Only Whole Milk. Alive and Young doesn’t water down the humor, and his laughs are genuine American wit and humor. You won’t find any “Made in China” tags on this blog. And unlike that other guy, A&Y has the humility to vote for the little guy. The other guy couldn’t: he was hindered by his own pride.

Well if you like un-American, watered-down, prideful humor then go ahead and vote for the other guy.

But if you like the real deal, All-American, whole-milk drinking toughness with a blog of great stature and of humble personage then you know who to vote for in 2008. Because Yes, I Can't.