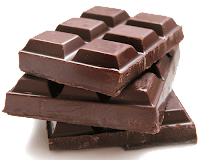 New Orleans, LA -- As Bourbon Street is cleared by the mounted police officers at midnight on Wednesday morning, signaling the end of the carnival season, millions of Americans will begin their Lenten fasts. Though the fast can come in many forms, it often comes in a person giving up some kind of culinary delight. Native New Orleanian and avid carnival goer, Charline Babaneaux, said without hesitation that this Lenten season she would be giving up, "chocolate."

This is no surprise to Daniel Smith, Coordinator of Survey for the Lenten Survey Group, who recently surveyed 10,000 people of various faiths, nationalities, gender, sex, races, elasticities, colors, colds, and provinces and discovered that 75% of those surveyed said they would be giving up chocolate this Lenten season. "It is no surprise," said Daniel Smith. "Chocolate is a wondrous food. At one time in history it was thought to have been a gift from the gods. With the flavinoids, caffeine boost, and sensual tastes, what greater culinary delicacy and delight can one possibly fast from during Lent? I can think of none."

However, the recent finding by the Lenten Survey Group have chocolate makers frowning all over the nation. With the economy in decline and no mention of bailout for chocolate companies in the recent stimulus package, chocolate companies are having to find other ways to stay afloat this Lenten season. A spokesperson for the Big and Rich Chocolate Company had the following to say: "Since we the chocolate industry of America are not privy to any of the stimulus money from President Obama, we are deriving clever and creative ways to keep the chocolate industry of America moving forward. Our first idea was to push Carob this Lenten season. However, on further examination of the issue, it was deemed that Carob was not in keeping with the spirit of Lent for those whom fast from Chocolate. Our second thought is to turn the chocolate bean into a high grade bio fuel. Another idea is to promote an underground vice campaign where we suggest that people give up real vices as opposed to things that they only think are vices: addiction, gluttony, pride, sloth, greed and the utilitarian use of others to name a few vices worthy of fasting from this season. Perhaps a person can give up watching TV during Lent or maybe fasting from beer can be an option for some. Then again, maybe a person can give up being lazy and start exercising. The last one posts many benefits to not only one's own health the also provides the opportunity and ability for one to consume more chocolate without all the guilt associated with it."

Whatever the outcome of Lent, the economic downturns, and chocolate companies one thing is for certain, come the end of Lent there is always a sweet treat in someone's basket.
Posted by Paul Cat at 11:50 PM

Great article. I shared this on my facebook page also. my wife gave up sweets including chocolate for lent, so he suggestions on what you should really give up reminded me of a discussion we had prior to lent.

thanks for sharing this.