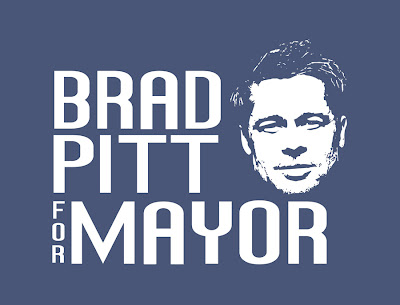 Some news is too funny not to be true, and in a state like Louisiana the politics could keep shows like Law and Order in business for decades. Anyway, it looks like there is a movement in NOLA to get the handsome actor, Brad Pitt, to toss his hat into the political arena. It makes perfect sense really. Louisiana has had many colorful characters for their governor leaders. So why not add an actor to that list?

Besides, if Pitt promises to make NOLA look as good as it did in Benjamin Button, he has my vote. Plus, there is no way he could possibly be as bad as Sugar Ray Nagin.

There are murmers afoot that the rightful heir to this illustrious lineage resides (sometimes) right here in New Orleans. Say it with me now: Mayor Brad Pitt.

"Mayor Brad Pitt." I kind of like the way that sounds.