Nun on the Run 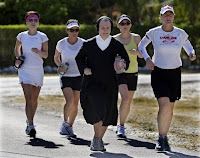 When Saint Paul wrote about running the good race, Sister Mary Elizabeth of Religious Teachers Fillippini took the Apostle's advice literally. At 60 years old, Sister Mary Elizabeth donned her black and white habit and hit the pavement in hopes to raise awareness for the AIDS orphans in Africa when she tried to run the 100 mile marathon in Key Largo, Florida this past May. Though midway through the race she was forced to to stop her run due to health and heat issues, but her goal was accomplished.

Why does she run in a habit? "Everyone looks at the nun in her habit!" The sister says. And when people 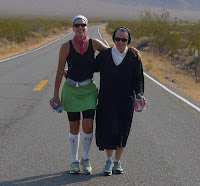 ask why she is running in her habit, which I can only assume is a good number, she uses it as an opportunity to tell people that she is running for the children. Moreover, she adds "It takes more than endurance to run 40 mines -- it takes purpose. Mine is helping orphans."