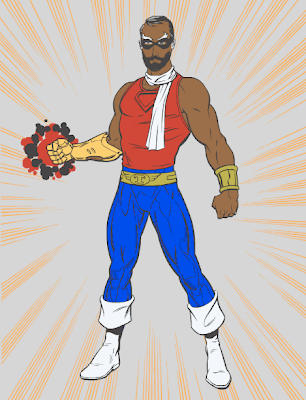 Powers: The proportional intellect and theological expertise that rivals the greatest of theologians who roam the globe. His "T" sense warns him of approaching theological heresy and heretics. TheoloGuy is able to deliver a 15 minute discourse on the problem of evil in only 5 minutes.

History: In a strange freak accident involving a floor buffer, a cup of coffee, electrocution, and gummie bears in the theology section of the local mega bookstore, mild mannered bowling alley owner John St. Pierre awoke from his accident to find himself covered in theological books, coffee and gummie bears. To his surprise, he found that he had absorbed all the theological understanding of the books that had been covering him and was now able to solve all theological conundrums. At first he used his powers only to discourse with his drunken obnoxious theologically misguided patrons. After learning that changing the mind of a drunk isn't easy, John St. Pierre started volunteering at his local RCIA and you ministry programs and now only uses his powers to hasten the coming of the Kingdom of God.

Allies: TheoloGuy has thought along side some of the greatest thinkers, theologians, and apologists to have lived during the modern error. His favorite theologians include St. Augustine, St. Louise de Montfort, and Jon D. Levenson.

Enemies: Now that would just be uncharitable to list here.

Actually, Foxfier, that looks like the Marvel Create Your Own Superhero site, which is a HeroMachine knockoff.