To Celebrate the Memorial of St. Ignatius of Loyola Let us Bake This Cake 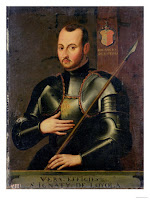 [Scroll down to the bottom if all you want is the cake recipe.]
The Society of Jesus, commonly knows as the Jesuits, was founded by one of the great Saints of the Catholic Church, Saint Ignatius of Loyola (Loyola means "wolves and pot" ).  As a youth, Inigo -- his birth name -- considered himself a playboy who suffered from vanity.  He desired to serve in the military and fight for a lady.  Eventually, he did get his wish to fight in a battle against the French.  At the Battle of Pamploma, Inigo received an injury to his leg when hit by a canon ball.  As the French entered the fort at which Inigo was defending, slaying the injured and resistent Spaniards, they were impressed by Inigo's great ferver at which he fought that they spared his life and brought him to a hospital for healing.

While at the hospital he had only two books at his disposal: the life of Christ and a book of the lives of the Saints.  Accustomed to reading the romance (Don't think Daniel Steel.  Think Kings and knights and ladies) and fantastic stories of knights, Inigo found the stories of the Saints to be uplifting and they stirred within himself something the romance stories could not.  Where the romance stories left him empty and sad, the stories of Christ and the Saints filled his heart and compelled him to goodness and service to God, which demonstrated St. Augustines, "you have created us for you O Lord and our hearts are restless till they rest in you" perfectly.

During his reading of the Saints, Inigo discovers the writing os St. Ignatius of Antioch, and he reads a line which went something to the effect: "out of the silence you created me oh God."  Inspired by the writings of St. Ignatius of Antioch, Inigo changes his name in imitation of this Saint.  Soon after Ignatius of Loyola would begin writing reflections on the spiritual life which would later become the "Spiritual Exercises."  The Exercises would eventually become the model from which most religious orders model their retreats.

If one would list the contributions the Jesuits made over the centuries in all the fields of theology and empirical sciences a work of book length would perhaps be sufficient.  Jesuits made significant contributions to physics, biology, evolutionary theory, reformed the Julian Calendar, geology, exploration (a 16/17th century Jesuit was the first person to report on Tibet), and more.  Today, the Jesuits still operate one of the best Observatories in the World.

One of my favorite stories about St. Ignatius of Loyola happened in his early years following his conversion to Christianity.  While on a road traveling, he happened upon a Spanish Moore traveling the same road.  The two immediately began discussing religion, and the Moore proceeded to speak unkindly about the Blessed Mother.  Ignatius, infuriated over the words from the Moore, wanted nothing more than to kill the blasphemer.  Wrestling with this impulse to defend the Virgin, kill the Moore, and follow Christ, he made a brief prayer in which he asked God to guide the donkey on which he rode down the right path upon reaching the fork in the road.  If the donkey goes down the same path as the Moore, Ignatius would kill the Moore.  If the donkey goes down the other road away from the Moore, he would allow the Moore to live.  The downkey chose the later and the Moore lived.  Saints weren't always saints, and they too confronted many of the same challenges as we.

To honor St. Ignatius, the people in the Basque region of Spain bake a specific cake in honor of their Saint.  If you would like to imitate the the Spanish and honor St. Ignatius with this cake, here is the recipe.

The recipe was given to me on a Jesuit Educator's Retreat in St. Louis.  At the time I was teaching at a Jesuit School in New Orleans.

In a  large bowl beat the egg whites with an electric beater until quite firm.  Slowly add the sugar while continuing to beat.  After the sugar has been used up, fold in the ground almonds and the flour.  Melt the butter; when cool, add it to the mixture, folding it in carefully.