Church of the Living Dead 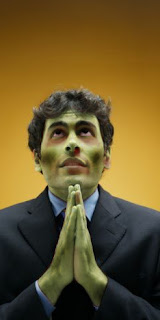 (Lack Jackson, TX) – Every Sunday morning Reverend Pat Cooper stands at the entrance of his church and is greeted with groans and moans from his congregation as they come shambling into services.  This might seems like a typical Sunday at any church; except, most of his parishioners are unusual to say the least, and they might more rightly be called “perishioners.”  Pastor Cooper is the pastor of the First Church of the Reanimated Lazarus, which is called by locals "the Church of the Living Dead."

When asked why a church of this nature was need, Pastor Cooper said,  “Ever since the Zombie Apocalypse a few years back, church attendance had been dwindling and most of our congregation had been turned into zombies.  One night, I was reading the Gospels and was inspired by the story of Christ resurrecting Lazarus.  I thought, ‘Heck, Lazarus is like a zombie.’ So that is where the idea first began.  Looking at Lazarus and the current state of the world, I realized that the Gospel was for all people, even the living dead.  Who are we to deny the message of Christ and to discriminate against others for no fault of their own and for the mere fact they no longer have a pulse?”

First Church of the Reanimated Lazarus has been a real learning experience for Pastor Pat.  It has required him to change the make up of ministries and church events offered at the church.  The Tuesday soup kitchen was change to a Tuesday Reattaching-Limbs sewing circle because the perishoners keep trying to eat the homeless.  Candy was not a big draw for the zombies, so the Easter egg hunt in now the Easter Live Critter hunt – which consists of hiding various small, still living, critters around the church property in cages for the perishoners to find and enjoy.

New challenges are certainly there. When asked about the dangers of this endeavor, Pastor Cooper said, “Of course there are dangers.  No one is denying that.  Occasionally, one of the living takes the rank of the unliving, but that is just a price to pay for this great new endeavor.  The early Christians didn’t shy away from the lions’ den; I’m not going to shy away from those who are life-challenged.  Besides, this parish really has been breathing life into the community.  The butcher shops are booming with business.”

Despite the new challenges, Pastor Pat says the average member, living or non, hasn’t changed much.  “The singing is about the same,” says the Pastor.  “ Groanings as before, and groanings now.  The difference is one might now argue that the non-living carry a better tune.  Before the outbreak, most of the congregation dressed wildly inappropriately in clothing that was worn and ill fitting, so the dress of the church hasn’t changed much either.   When I preach from the pulpit, zombie or not, I get the same glazed look of boredom, almost like nothing is going on up here, in the mind.  Lastly, no matter how much I talk or tell them or teach them, neither group has a sense of moral right and wrong.”

Whether this new church will continue or Pastor Pat will come to his demise at the hands of his own perishioners remains to be determined.  In the mean time, Pastor Pat will continue preaching to the living-dead.  If you happen to be in the Lake Jackson area, stop by and say hello to Pastor Cooper.  First time visitors receive a free t-shirt of their choice.  You can choose from shirts that have the the following sayings on the front, “Jesus ❤’s zombies”; “Lazarus was a zombie”; and “The undead is the new living.”
Posted by Paul Cat at 9:00 AM