The Evil Apple: Did Adam and Eve Really Eat an Apple? 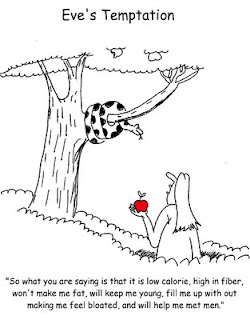 A student recently asked after reading the temptation and fall of Adam and Eve, “The Bible didn’t say the fruit was an apple.  Why do we say Adam and Eve ate an apple?”
I am always happy to see when a student not only does a careful reading but also thinks about the reading they are given.   In order to answer the student’s question it helps to understand
1.  We do not really know with certainty the kind of fruit Adam and Eve ate from the Tree of the Knowledge of Good and Evil.  I’ve heard it suggested the fruit was a fig or a pomegranate.  Whatever the fruit was, it would have to be tempting on a number of levels: pleasing to the eyes, good for food, and good for gaining knowledge.  Obviously most fruits, at least those found in supermarkets today, can be seen as pleasing to the eyes and good for food, but I’m not sure what earthly fruit is good for gaining knowledge.
2.  The Bible has gone through many translations.  This tradition of Adam and Eve eating an apple did not surface till sometime after St. Jerome translated the Bible into Latin.  This brings us to the tradition of the Apple.  The Latin word for “evil” is “malum.”  The “a” in “malum” is pronounced with a short “a” as the “a” in “multa”  The Latin word for “apple” is “malum” – spelled the same as the Latin word for “evil.”  The differences being in parts of speech one as an adjective and the other a noun and how “malum” (apple) is pronounced.  “Malum” (apple) has a long “a” which is pronounced more like the "a" in "father"


So in short, the reason Adam and Eve are said to have eaten an apple is that it is a play on words in the Latin language that has remained in popular use even to today. 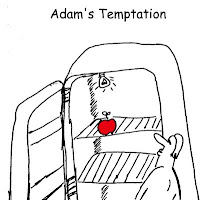 Saint Augustine couldn't do it, but can someone else explain what kind of fruit Adam and Eve ate in the story? After 6000+ years I think we are all due an intelligent explanation. No guesses, opinions, or beliefs, please--just the facts that we know from the story. But first, do an Internet search: First Scandal.