Pelosi says [following one's conscience] is akin to having hospitals “say to a woman, ‘I’m sorry you could die’ if you don’t get an abortion,” she told the Washington Post. [Can you provide us with an example?  Often times, the doctors are trying to address the disease and not abort the child; however, the result of treating the disease may sadly result in the loss of the child.  This is not an abortion.  This is the case with treating an ectopic pregnancy.  I think the real question is why aren't the doctor's and hospitals bold enough to try and save both?  I'd guess they'd rather play to not lose than play to win.]

“Those who dispute that characterization “may not like the language,’’ she said, “but the truth is what I said. I’m a devout Catholic and I honor my faith and love it . . . but they [Isn't it interesting that she says she is a "devout Catholic" then goes on to call Catholics 'they' as if she is not part of the Catholic Church or as if the others who believe differently from her are not the devout Catholics?  Perhaps a "we" should have been a better pronoun to use.] have this conscience thing” that the Post said Pelosi “insists put women at physical risk, although Catholic providers strongly disagree.”  [Really?  A conscience puts women at risk?  I thought conscience helping by not putting our soul at risk.]

For some strange reason, this brings to mind the old Looney Toons Cartoon where Elmer Fud is out trying to "Kill the Wrabbit" set to the tune of Wagner's Ride of the Valkaries.  Except Pelosi might be singing "Kill your conscience." 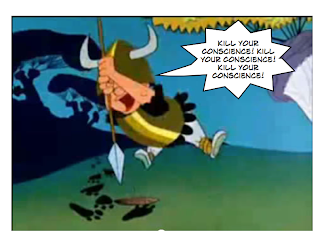 So what is the conscience?  Here is a refresher.
From The Catholic Encyclopedia at Newadvent.org:
It is often a good maxim not to mind for a time how a thing came to be, but to see what it actually is. To do so in regard to conscience before we take up the history of philosophy in its regard is wise policy, for it will give us some clear doctrine upon which to lay hold, while we travel through a region perplexed by much confusion of thought. The following points are cardinal: