I attended a vocation discernment retreat this past weekend, sponsored by a local Serra Club, which was overall productive.  The second presentation for the weekend was on prayer, which was delivered by a Cenacle Sister (one of the many women's religious orders the vatican is calling for renewal specifically for what she taught us).  Keep in mind, she is presenting a talk on prayer, which is a crucial component when discerning one's vocation, to a large number of young people who will need to use what she presents as a vehicle in discerning his or her vocation; so my expectation for the presentation was high.  At minimum I was expecting some quotes from saints and and some references to the section of prayer from the Catechism of the Catholic Church.  The section on prayer is actually the most beautiful section and arguably the richest section of the entire Catechism.  But I doubt sister Cenacle knew this, for she appeared to be allergic the orthodoxy. 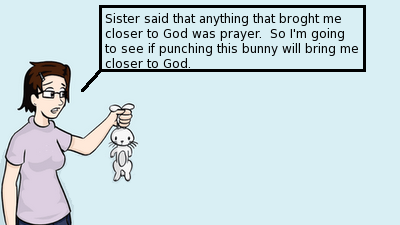 After the retreat was said and done, I was still bothered by what the Sister taught.  I was bothered to such a degree that I typed the following letter, and I am currently debating on whether or not I should send this to the local Serra Club (who sponsored the event) and possibly the vocations director for the archdiocese.  What do you think? Does the letter sound too harsh or too inflammatory?  I don't want to sound like an uber conservative religious nut job but as a concerned member of the community.

To Whom It May Concern:

Is their any way to get in touch with the sister herself to ask her to explain what she meant?

Looks like a good letter to me and certainly not some nitpicky rant. Certainly the way she taught about prayer was extremely unhelpful and maybe even damaging to someone's prayer life.

I would recommend removing the line about torturing puppies. It might be seen as hyperbole and your letter dismissed as disgruntled ramblings. Also, at one point you typed medication instead of meditation.

Thanks for the feedback.