Tolkien and the Feast of the Annunciation 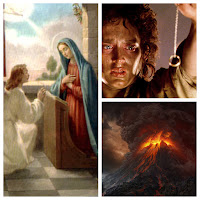 Happy Tolkien Reading Day as well as happy Feast of the Annunciation.

Some years back the Tolkien Society was asked if there was a day in which Tolkien fans could gather, read, and celebrate Tolkien.  The day the Tolkien Society chose for this is March 25 and is known as Tolkien Reading Day (TRD).  Why March 25th?  It is the day that the Ring of Power in The Lord of the Rings is cast into the fiery inferno from which it was made, Mount Doom.

Of all 365 days of a year, why chose March 25 instead of say, June 3rd?  It is somewhat simple if you are familiar with Tolkien's Catholic imagery in "The Lord of the Rings."  March 25 in the Catholic tradition serves as the feast of the Annunciation, the day the Angel Gabriel announced to Mary that she would bear a son by means of the Holy Spirit and he would save the world from their sins.  But there is more, in early Christianity, March 25 was viewed as not only the day God the Son became incarnate, but there was also a tradition that said he also died on March 25th.  That's right, Jesus was made flesh and died on the same day.  This is keeping with a tradition that believed that prophets of God died on the same day they were born or conceived.  In fact, many early Christian churches celebrated Christ's death on this fixed date before Easter and Good Friday became a movable feast based upon the cycles of the moon as with the Jewish Passover.

What am I saying? To the Christian March 25th is the day that Lucifer is defeated by means of the incarnation and death of Christ.  Likewise, the day Sauron is defeated is also March 25th when the Ring was cast into Mount Doom.  One might argue that Tolkien is preparing his reader for Christ by means of a story. After all, he does write of a pre-Christian world.  It would only makes sense that there are foreshadowing of Christ to be found in it like there are in other pre-Christian cultures.

There are other events that are said to have happened on March 25th.  They are:

This was illuminating - thank you for it.

The Mar.25 Annunciation Feast Was once named Festum Incarnationis and Conceptio Christi, and celebrated as a springtime New Year's Day ~ It is observed 9 months before Christmas

In India, kerala is the only state which conducts teacher eligibility test regularly. Concluding that, final dates of Kerala Teacher Eligibility Test have not yet been announced. So, what is next in the row. Indeed, that next in the row is all the upcoming details of Kerala teacher eligiblity test. And that mainly includes a letter without which, admission into examination hall is not allowed. Hope you understand that, it is keralapareekshabhavan 2018