In July of 1801 the Notre Dame of Paris Cathedral was returned to the Catholic Church in a state of disarray.  Seven months later, the savior of this now glorious building would be born: Victor Hugo.  Hugo was able to save the Cathedral by means of his popular book Notre Dame de Paris or as known to most English speakers The Hunchback of Notre Dame.  One might even argue that Hugo’s main purpose of writing the text was the save the church, for it was set for demolition and or possible sale in the early 19th century.

However, the church about which Hugo wrote, the church that attracted
thousands of visitors in the 19th century after the book’s publication in January of 1831, the church that when fans of Hugo’s book arrived in Paris and sought out the beautiful building that was described in text they did not find for what they hoped.  Instead, they found an eyesore ready for destruction.  This is not to say that Hugo lied in his book or to his audience.  He does spend chapters describing the dilapidated condition of the church as he knew it; however, he compares it to what it was in the 15th century and how he envisioned it in its greatest grandeur. The tourists wanted the 15th century version and not the blight upon the city of Paris that it had become.

The Cathedral of Our Lady of Paris has a tumultuous history of alteration often for the worse.  In the 16th century the Huguenots, French protestants inspired by the writing of the reformer John Calvin, rioted and purged Notre Dame of all things they considered pagan or idolatrous.  During the 18th century the church underwent a “modernization,” which some might call vandalism.  The gothic style had fallen out of fashion and was deemed to be barbaric, very ironic indeed, so several architects worked to make the church into a more modern building.  Stain glasses were dismantled and replaced with clear glass in order to let in more light, and the stunning gothic style choir screens were replaced by a more plain style of screen. Also occurring during the 18th century was the famous French Revolution.  Much damage was done to Notre Dame in the name of reason: the bell tower and spire from the 13th century was removed, some of the bells were melted down and repurposed, 28 statues in the Gallery of Kings were destroyed, the church itself was made into a Temple of Reason, and finally the church was made into a storage hall and stable. 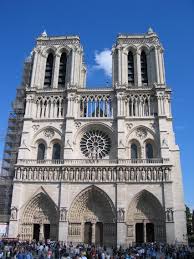 The Restoration of Notre Dame began in 1844 with a decree from King Louis-Philippe I.  It took some 20 years for restoration to be completed and the church rededication by Archbishop Darboy of Parish.  However, the lead-restoring architect, Eugene Viollet-le-Duc, lamented the restoration process.  He said, “to restore is not to maintain it, repair it or remake it, it is to re-establish it in a complete state that my never have existed at a given moment” (notredamedeparis.fr).  In other words, the Notre Dame of past beauty is not the Notre Dame of today’s beauty.

Today Notre Dame is still undergoing renovations and preservations, the last completed in 2010.  It houses several relics of Christ (the crown of thorns, a fragment of the true cross, and others) and play host to some 12 million visitors a year.  After centuries of mistreatment, additions, vandalism, and purgings, the visitors find a beautiful Cathedral that was not as it is today.  Fortunately, this is not a bad thing, for Hugo was able to bring about the salvation of a most magnificent building because he was able to capture the once forgotten and lost beauty of a church with his prose.  In other words, he inspired in the heart of his reader the eternal longing for beauty.  When the readers could not find the beauty in the way Hugo described, they set about trying to reestablish what once was, not for the sake of preservation or posterity, but because beauty and majesty speaks to the human heart in a way that no other things can.
Posted by Paul Cat at 4:05 PM

Thank you very much for the valuable post. Here you have shared Victor Hugo Saved Notre Dame of Paris information. This is really cool. I hope everyone will be like this post. The blog or and best that is extremely useful to keep I can share the ideas of the future as this is really what I was looking for, I am very comfortable and pleased to come here. One more important things is SSC Result 2019 coming very soon. Then every students can check their SSC Result 2019 BD from the official website. Thanks

Great article dear. This is really very helpful for everyone. Thanks for share this article. Keep up the good work!! Also visit here for all mobile price.

I would also motivate just about every person to save this web page for any favorite assistance to assist posted the appearance. Gnews71

Superbly written article, if only all bloggers offered the same content as you, the internet would be a far better place.. Google play codes giveaway

You can also visit another option if you need it. In Bangladesh there is an exam is going to start from 1 February 2020. That named SSC Exam. We have made a suggestion for the exam you can check this SSC Suggestion 2020 from here.

Education Board Results has declared that the SSC Exam Result 2020 publish date. Accodring to the news. SSC Result 2020 is going to be published on April, 2020 on BDJobResult. So want to get SSC Result with Marksheet?
Link : SSC Result 2020

Education Board Results has declared that the SSC Exam Result 2020 publish date. Accodring to the news. SSC Result 2020 is going to be published on April, 2020 on Bdpoints.com So want to get SSC Result with Marksheet?
Link :: SSC result 2020

SSC Result coming soon. All SSC Examine waiting to get Their SSC Result 2020. This year, SSC Result 2020 will publish on 06 May 2020. All students can collect their result from Bangladesh Education Board official website.

Government Jobs is the most popular jobs. All people want to join in Bangladesh Government organization. We are ready to provide all Govt Jobs Circular 2020 for unemployed people. You get find any types of BD Jobs Circular from our website.

SSC Exam Result is coming soon. All SSC Examine waiting to get their SSC Exam Result 2020. This year, SSC Result 2020 will publish on 7th May 2020 after 12PM. Students collect their Result from Bangladesh Education Board official website.

SSC Exam Result is coming soon. All SSC Examine waiting to get their SSC Exam Result 2020. This year, SSC Result 2020 will publish on 7th May 2020 after 12PM. Students collect their Result from Bangladesh Education Board official website.

SSC Result coming soon. All SSC Examine waiting to get Their এসএসসি রেজাল্ট ২০২০. This year, SSC Result 2020 will publish on 06 May 2020. All students can collect their result from Bangladesh Education Board official website

Hello Dear Friends, Thanks for sharing such very important information. It’s a really good news For SSC Result 2020
Candidates & NU Honours Result Candidates. This Post Very Helpful For Us. Please Share This Post On Your Timeline. You also Visit Our Website BDallResults

What a great article!. Your posts is really helpful for me.Thanks for your wonderful post. I am very happy to read your post SSC Exam Result 2020 Published on April Check Your Result Download the Full Marksheet 2020 SSC Result 2020. Honours 2nd Year Result 2020

HSC Examination was completed few days ago. Now HSC Result is the trending topic in Bangladesh. All candidates will check their HSC Result 2020 from Bangladesh Educational official website at educationboardresults.gov.bd.

Hello my dear visitors. Hope everyone is well. Today, I’m going to write a post. In addition, I’m recording some video lessons about SSC Result 2020. At present one of the most highlights topic is SSC. On the other hand Currently the most discussed topic is Secondary School Certificate (SSC) Result SSC. Exam Result 2020 publishing date is knocking at the door. After successfully complete Secondary School Certificate (SSC) exam candidates are eagerly waiting for result. According to the Education Board Bangladesh authority, the result of SSC is to be announced by July 17, 2020 after 12pm. At first SSC Result 2020 published online on the official web site. Such as Educationboardresults.gov.bd and on eboardresults.com. But every year candidates face many problem to get SSC Result. For them we give a better solution. We create a server for SSC candidates only for easily get result. To check your SSC Result 2020 visit BDJobResult. It is an educational website. In order to get the result, the candidates must be need to submit their SSC exam Roll number, Registration number, Passing year, Board name. Without this information candidate cannot get their SSC Result. So candidates are you ready for get result? Don’t worry If you give a good exam then you will 100% pass in this exam. Otherwise don’t be upset.
Please visit the link given below for more details: SSC Result 2020

SSC Institution Result 2020: EIIN refers to Educational Institute Identification Number. Every school and college has its own EIIN Number. One can get all the information and JSC, SSC & HSC Result by this EIIN Number. If anyone wants to all the SSC results of any school then he/she can try the SSC Result EIIN Method.

But unfortunately, most of the Muslim children go to general education from their childhood instated of Madrasah education. So, Details of Dakhil Result 2020 is shared below.

SSC Result Bangladesh is near to the door. It is very important for the students of SSC Exam, Dakhil Exam, and Vocational Examination in 2020. SSC stands for Secondary School Certificate which is the most significant for every student. Though it is the third board exam of a student it still has the most significant on a student’s life. Before the 2013 SSC Exam was the first board exam on a student’s life.

SSCExmResults.com is significant for who sat for the SSC or Dakhil or Vocational Examination in the year of 2020. In our counry Bangladesh, SSC or Secondary School Certificate examination is hard for a Secondary level students.